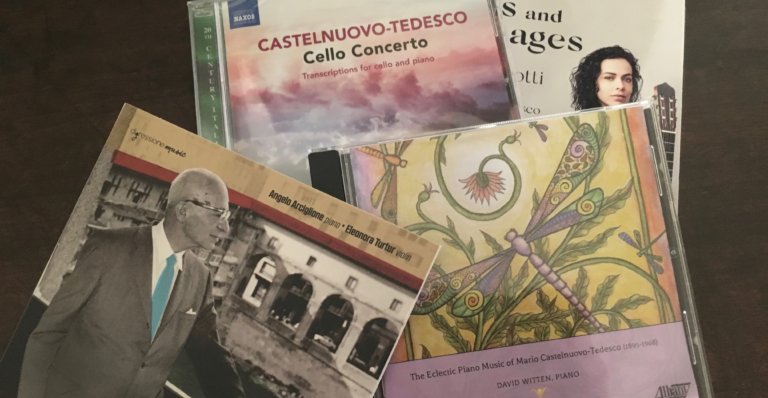 With a trove of new recordings released in 2018, some of Castelnuovo-Tedesco’s lesser-known works have emerged from the shadows. Thanks to the devoted research and passionate advocacy of musicians in the United States and in Italy, these CDs broaden our understanding of the composer’s musical production. More premiere recordings are expected in Fall 2018 and in 2019.

On Exotica (Digressione Music), Angelo Arciglione (piano) and Eleonora Turtur (violin) provide a panorama of largely unknown works following the composer’s life from a Ninna-Nanna (Berceuse) composed at age 10 in Florence to works from his California years, such as Stars op. 104, sketches dedicated to four Hollywood legends and Exotica: A Rhapsody of the South Seas.

Brinton Averil Smith and Evelyn Chen spotlight Castelnuovo-Tedesco’s playful and virtuosic freely composed transcriptions for cello and piano of Mozart, Rossini and Ravel on their CD (Naxos). Featuring works that Castelnuovo-Tedesco created for Piatigorsky and Heifetz, the recording includes several world premieres as well as Smith’s live performance of the Castelnuovo-Tedesco Cello Concerto with the Houston Symphony.

With The Eclectic Piano Music of Mario Castelnuovo-Tedesco (Albany Records), David Witten treats the listener to interpretations of rarely-heard pages for solo piano, including early works as well as three of his “Greeting Cards,’ musical written in tribute to pianist friends: Tango for Andre Previn (b.1929); Mirages for Walter Gieseking (1895-1956); and Slow for Nicolas Slominsky (1894-1995).

For her first CD, Suites and Homages (Stradivarius), guitarist Renata Arlotti performs several of Castelnuovo-Tedesco’s solo guitar works which were not part of Segovia’s celebrated repertoire and for this reason garnered less acclaim during the composer’s lifetime: Rondo, Opus 129; Escamarran, Opus 177; and Passacaglia (Omaggio a Roncalli), Opus 180.

Also from the Stradivarius label, Guitarist Luca Trabucchi and Tenor Leonardo De Lisi have collaborated on the first modern studio recording of Vogelweide (1958), Castelnuovo-Tedesco’s  song cycle of 10 lieder based on texts by the late medieval Tyrolean Minnesanger Walther von der Vogelweide.  Dedicated to  Dietrich Fischer-Dieskau and Siegfried Behrend, Castelnuovo-Tedesco wrote in the work in 1958 while while judging the Busoni Piano Competition in Bolzano, Italy.

We use cookies to guarantee you the best experience on our site. If you continue to use this site, we will consider that you accept the use of cookies.OkFind out more